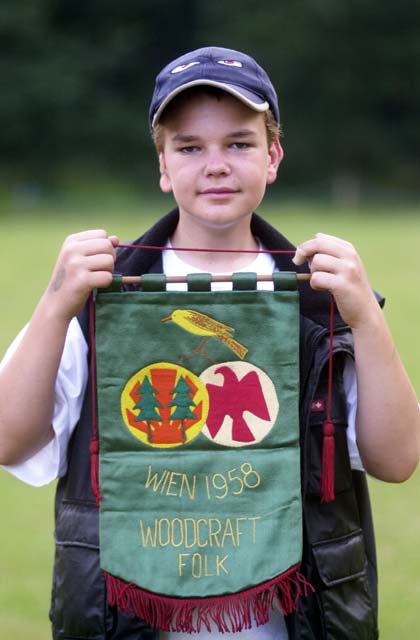 Embroidered banner showing the symbols of both the Woodcraft Folk and the IFM, displayed by member of Stanwell District

This banner was commissioned by Harrow Woodcraft Folk to remember my brother Peter Woolf (Yellowhammer). Peter was camping at the IFM camp and died in a tragic accident on a day trip to the Semmering mountains while walking a precarious path. The Kinderfreund and Austrian Red Falcons were very supportive as was the Woodcraft Folk. My parents decided that Peter should be buried in the village of Reichenau's cemetery. The family has visited his grave on a number of occasions and alway found it to be well looked after, which we appreciate greatly. The banner was hung in the Wealdstone Co-op Hall for some years and was removed when the hall was being redecorated. It was never rehung. It is now been included in the new book, 'A People's History of Woodcraft Folk'. It is good to see that it is intact and trust it will be archived safely for the future along with this short provenance.

Created by Johnwoolf on 16th December 2016